Apparently, there has been a weakness in modern DRAM which had been known within the computing industry since 2012 which has been given name rowhammer. It is particularly the interesting because if how nearby memory locations have their bits flipped which violates the very foundation of our modern multiprocess systems.
Perhaps, it is time that all our PCs should have ECC memory by default which would at least fix single bit disturbances?

Some project foundation classes for Java.

Have been organising and repackaging some of my source code for release as free open source code. The flavour du jour is Java and these are just a few foundation classes which will be built upon in further packages, hopefully released soon (time permitting). #OpenSource #BSD #Java﻿ https://github.com/xiphis/xiphis-utils
Posted by Unknown at 11/25/2014 07:41:00 am No comments:

Oh, how editing standards at The Guardian has fallen.

The Guardian posted this article, entitled: Women, beware this PUA army of sleazebags, saddos and weirdos by Hadley Freeman

As someone who enjoys sci-fi and whose name is in the credits for more than one WoW game, this is inappropriate offensive mischaracterization. Some people are jerks because that is simply what they are and it has nothing to do with what fiction genre they enjoy or what computer games they have played.
I guess The Guardian is becoming just another sleazy tabloid with ineffective editors.

The right tool for the job...

I've just thought of a great analogy for something:

Imagine that a team has an OKR:

The two items are designed to work together.

Now imagine that someone needs to fix this, afterwards.

Opinion: Blogging about homophones and homonyms.

Homophones and homonyms are two very important aspects of the English language which non-native speakers of the language need to understand in order to adequately communicate unambiguously with native English speakers. If this person was fired for blogging about them from a "language school", then it can't have been a good language school.
Posted by Unknown at 7/31/2014 10:11:00 am No comments:

Before going on holiday, I grabbed a book from my "to be read" pile and this time, it was the book "On Intelligence" by Jeff Hawkins.
This is, by far, the most approachable book I have read on the topic in about 15 years and even though the first 100 pages of this 245 page book hasn't yet expounded upon the meat of the topic which the author wants to discuss, he does excellent job of using analogies to bring readers of many levels to the same point.
Jeff Hawkins puts together a very convincing case and I think that this book is a "must read" for everyone who, at least, has a passing curiosity on the nature and nurture of consciousness.

Why must "Google Play Services" use up 40% of my phone's power consumption? Ugh.
#android #googlefail

OsmAnd is better than Google Maps

I am using a HTC One M7 phone and to maximise battery life, I have mine configured to not use WiFi+Data to determine location. Because of this, Google Maps gets in a pouty mess and refuses to work even though it may use the GPS to directly acquire the location. OsmAnd doesn't throw such tantrums and works fine.
I should note that this tantrum of Google Maps appears to be a recent change, possibly related to their "show nearby offers" feature. In any case, it is a huge step backwards in functionality.

Do no evil, Google?

Actually, I'd settle for "no regression".

I can no longer recommend Google Maps for mapping on Android. It is broken. However, Open Street Maps' OsmAnd works great and did not balk when used 6500 miles apart without rebooting the phone.

Dear HTC, a suggestion for M9

If only they'd listen...


Dear HTC, Please bring back the pogo-pin dock connectors for charging and auto-pairing to Bluetooth audio devices. I do enjoy your HTC One (M7) phone but the lack of pogo-pin connectors was a disappointment; I lived with it but I do not like the daily wear on the micro USB connector. I was further disappointed when you launched the One successor (M8) without it either. As a result, I'm willing to wait and see what your M9 offering brings - I can wait. We know you can do it - your HTC Nexus One had the pogo pins for its docks but possibly, the lack of documentation over it was disappointing, even though it is somewhat trivial to reverse engineer. Please reintroduce the pogo pins for charging and docks in your future phones. Thanks, Antony.

Email ThisBlogThis!Share to TwitterShare to FacebookShare to Pinterest
Labels: htc, HTC One

Thought for the day:

Here is a thought for today:


People will try to use every feature of a product to be "cool".
Therefore, any build tool which permits circular dependencies is a broken tool.

Email ThisBlogThis!Share to TwitterShare to FacebookShare to Pinterest
Labels: gradle

I think that the word, internet, should be restricted to mean networks which allow free and equal access for packets from other networks... As in an "inter-network network".
Networks which do not permit free and equal networks should be named for their controlling interest. So company owned and moderated networks, like Comcast, which limit bandwidth or filter content are not "internets" but are, in Comcast's case, Comcast's network which has a moderated gateway to the internet. Similarly, people in China or Turkey don't have internet service providers: they have "turknet" or "chinet" service providers which has a moderated gateway to the internet.
I think we do need to make this distinction so that users are not misled.

Email ThisBlogThis!Share to TwitterShare to FacebookShare to Pinterest
Labels: internet

I don't care for Gradle.

I could vote for GRADLE-2496 but to be honest, I don't like Gradle enough to create an account just to vote for this issue. Given that the bug was first reported in 2012, few others care enough, too. 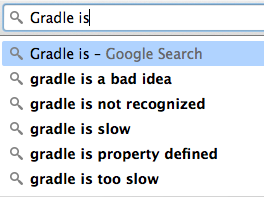 In my opinion, Gradle is a bad idea, implemented poorly. It should never take dozens of gigabytes of RAM and many tens of minutes, just to load its config files and determine that the command asked was mistyped.
Posted by Unknown at 4/11/2014 03:18:00 pm No comments:

Amazing how people like to celebrate their stupidity and parade their ignorance as a virtue.
Post by Global Secular Humanist Movement.
Posted by Unknown at 3/17/2014 09:58:00 pm No comments:

Why do I keep on having to do this?

I think I shall leave this version of the patch right here for future reference.


That was one fast year... Zoom!
When it comes to personal objectives, not a particularly successful year.

As a courtesy, the link to last year's retrospective is right here.

As with last year, lets start with the notable flubs:

As +Eric Idle says; always look at the bright side of life. There were a few very minor victories:

Obligatory wish-list for the new year which contains some duplicates from last year. As always, these aren't resolutions but wishy-washy objectives which may or may not be met, blah, blah...
Perhaps a little shorter list than last year.

2013 was a forgettable year except for time with my daughter.