There appears to be a rash of billionaires announcing support for the idea of a global satellite-based internet service, for example: http://www.extremetech.com/extreme/197711-elon-musk-unveils-new-plan-to-circle-to-earth-in-satellites-for-fast-low-latency-internet

I would wager that if we have had good affordable internet in our first-world abodes, the wealthy would not be so inclined to think of such schemes. Like as like not, for a new third-party to compete on the ground is practically impossible due to legal red tape and so the space option becomes the most practical, in spite of being a bit inefficient. It's easy to imagine the Elon Musks of the world venting frustration about lack of coverage or simply being unable to cancel Comcast without losing sanity...

Of course, when the time comes, the legacy telcos will complain about unfair competition from these upstarts and will campaign for government hand-outs to help modernise their networks; something which they should already be doing instead of accumulating profit and giving the money to their directors and shareholders.

It will be curious to see what happens. Ideally, the telcos will see the light; otherwise, I won't lose any sleep as their networks decay into obsolescence.

Christian terrorist Jeanine Pirro, calling for a jihad/crusade to mass murder other people because other places which have tried mass murder worked out great. 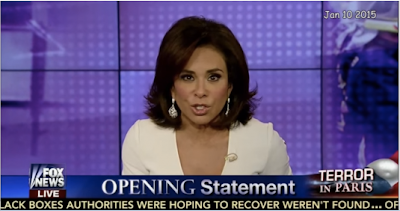 I'm all for free speech except when it's threats, advocating violence or inciting violence.

Unlike the fox gaffe earlier this week, this is not funny.

Email ThisBlogThis!Share to TwitterShare to FacebookShare to Pinterest
Labels: get off my lawn
Newer Posts Older Posts Home
Subscribe to: Posts (Atom)